Quite a trove of ancient dance clips lives on YouTube.  (Though ‘ancient’ in cinema terms means beginning of the 20th century; we’re not talking Pharaoh’s pyramids here.)  Among them are two films of Ellen Price, once the prima ballerina of the Royal Danish Ballet, dancing solos from the company’s signature piece, August Bournonville’s La Sylphide.  The first is from 1903, with Price dancing the Sylph’s opening solo (when James is asleep), the second from 1906, in which she dances that same opening solo followed by the Sylph’s second solo in the first act (when she dances for James).  These clips are courtesy of the YouTube channel hookham, which I recommend you check out for its varied collection of dance films.

Both films, at least as seen on YT, are in wretched condition, in need of serious restoration.  The images glare, blot, waver, fade to white, or shade too darkly; and I wonder if the playback speed is correct (at times Price moves awfully fast).  Then there are the original conditions under which the films were made, which also may affect our impressions.  They seem almost on-the-fly in feel, as if the camera started cranking without much ado, and in a space a little larger than my bathroom (it was probably done in the photographer’s studio, with a backdrop hastily tacked up for ‘atmosphere’).  My guess is Price also had to stay within floor markings so as not to pass out of camera range (cameras couldn’t move then).  That probably shortened her jumps, as well as constrained her movements.  Yet, conversely, the limited space adds to these films’ antique charm.  It’s as if Price is prancing atop a music box or incised within a cameo, preserved in a moment of flight.

In looking at Price herself (who danced professionally from 1895-1913), or at least what’s seen of her on these films, she’s not what would make a ballet dancer today.  She’s small, sturdy, muscular, even looks a bit plump.  She’s not heavy (the camera adds weight), but not bone-thin like dancers today.  Beauty standards were different, and Price does have a coating of flesh on her limbs.  And obviously her technique is nothing like today’s.  She hasn’t pronounced turnout, and her pointe work is not sustained balances nor stabbing jabs (though her shoes would not have been the harder ones now); she often dances on demi-pointe.  I noticed she lunges forward frequently, though that may not only be different technique but a different dance aesthetic.  Price’s arabesque, for instance, is softer in shape, creating a long, flowing body line once thought the arabesque ideal.  Whereas dancers today like to throw both upper and lower body up to form an extreme V-shape profile, like a pair of pincers.  I’m not sure grotesquerie is an improvement.

But when Price does balance on pointe, she performs as though stepping, lightly and swiftly, on the tops of grass blades.  The effect is airy and charming.  You sense the ‘point,’ as it were, of pointe work within this ballet’s context, of the Sylph as a supernatural creature who (as her name implies) is literally lighter than air.  In the 1903 film Price near the end does a small jump forward into arabesque, her upper body leaning forward as she faces the camera, arms spread out, head raised, face smiling.  It’s a lovely, warm moment, and you sense what the woman’s stage presence must have been like.  It’s also indicative of the Bournonville spread-armed style of dancing, the upper body relaxed and open, scooping up the world in an embrace. 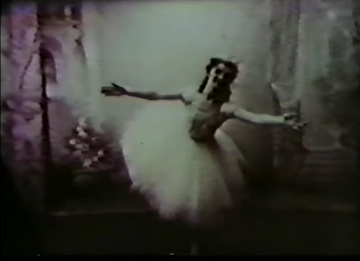 In the second (1906) film Price again poses momentarily on pointe in arabesque, one arm raised up straight, the other stretched behind her—again, that sense of balancing on petal tips, of stepping onto air, so lightly is the pose held.  She has ballon and speed; her side-to-side pas de bourrees and rond de jambes en l’air are done swiftly, delicately, but fully.  And Price brings out the Sylph’s happy demeanor, her carefree ambiance.  You note her springiness of step (no other word suffices –‘spring’ is what Price had) and a projection of sweet, girlish innocence.  Her Sylph is a child, a playful young animal, a sprite.  When she claps her hands in her second solo, she carries you away with her joy.  And her terre-à-terre work is fleet and light—she seems to skim. Her approach is light, too; there’s nothing tragic about this Sylph, at least in these solos. It must have made her death at the end even more heartrending.

Price was a dancer of her time—physically, technically, artistically.  Unlike today’s dancers, her dancing, her aspect, tries consciously for charm.  She directs her effects outward, towards the camera-as-audience.  It might have been an accepted performance style; Theophile Gautier, for example, approved, in his dance writings, of a ballerina’s onstage coquetry.  But Price’s Bournonville training is still evident today:  Her upper body is quiet, at ease (you sense no strain when she leaps and turns), her footwork quick and clear, her phrasing lyrical.  And her ballon is wonderful—not big space-clearing leaps (she clearly doesn’t have the space to perform them, anyway), but a bound, carried by the wind and into the air, where her Sylph is most truly comfortable.

What’s strange, even moving, about watching these two films, is to realize that Price was, in her time (early 1900s), closer to Bournonville’s era (1830s-1840s), than we, in the third decade of the 21st century at this writing, are to her.  Her dancing in these films may preserve something closer to how Bournonville himself would have danced.  It’s why they’re such invaluable documents, and why I hope someone, someday, can restore these films.  Because Price’s caught image on celluloid is, in a word…priceless.