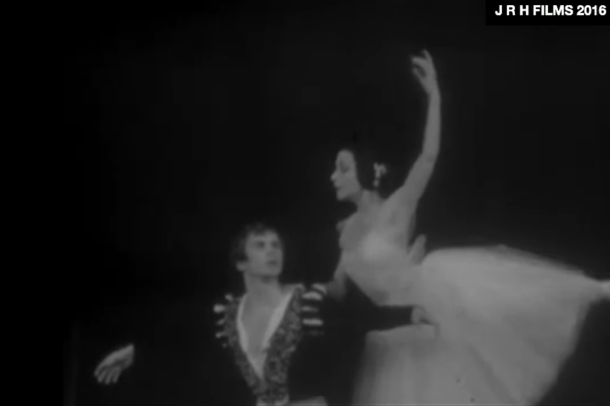 Here, from the invaluable John Hall You Tube channel, is a video of the great French ballerina Yvette Chauviré, in two brief (undated) film clips of her performing in Giselle.  The first is with Rudolf Nureyev as her partner, the second with Cyril Atanassoff:

Per Hall, the voiceover in the first section belongs to Nureyev, in the second to Chauviré herself.

The first clip, of Chauviré with Nureyev, in the second act, I’m pretty sure is from the early 1960s.  Per Julie Kavanagh’s biography of the dancer, Nureyev had first seen Chauviré dance in 1958, during a Paris Opera Ballet tour of Russia.  Nureyev would later dance Giselle with Chauviré on at least two occasions, the first during a 1961 de Cuevas Ballet tour in Italy, then again with the Royal Ballet in 1962 (her “portrayal” then, writes Kavanagh, “only a blurred outline of what it used to be”).  Whichever performance this might be, the film quality is unfortunately poor, the black-and-white cinematography grainy, blurred, and dark (probably from filming under stage-lighting conditions).

Despite the uncertain film quality, however, the dance quality does come through.  As Kavanagh notes:  “It was [Chauviré’s] rare ability to fuse classical clarity of line with Romantic feeling that had made her one of the great Giselles of all time.”  Details are lovely, such as the teeny-tiny bourrees, feathery light, that skim like a dragonfly, or the beautiful uplift through the breastbone, as if sculpted from breathing marble.  Kavanagh describes Chauviré as “[T]he essence of Parisian allure with her long slender limbs, langorous femininity, and swan neck”; although to my eyes, Chauviré, no longer in her prime, looks soft and round, with slightly plump upper arms (to be fair, Chauviré danced well before today’s era of the super-thin, super-stretched dancer).  Seen next to the young Nureyev, her aura is old-fashioned, out of a 19th-century lithograph; while Rudolf, then the coming star, is a sexy beast—robust and athletic, with a rock-star dazzle, his every move, in arms and torso, in the whole body, imprinting itself on the very air. 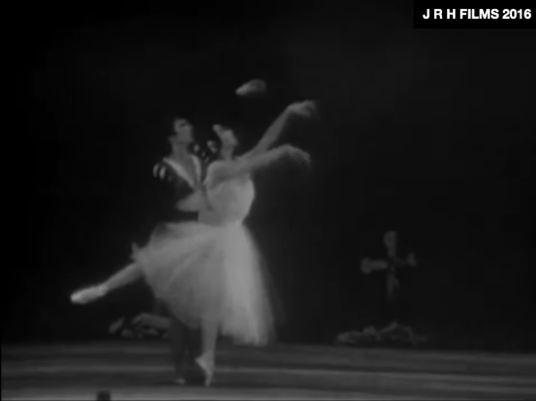 Yet Chauviré, in spite of her old-fashioned style, conveys, with her calm upper body and floating arms, an otherworldly spirituality, harkening back to the original religious undertones of the ballet’s second act.  In a series of travelling lifts, she gazes up while stretching her arms up and forward, almost in a praying gesture, her face serene and distant, above earthly concerns.  That unearthly aspect extends to the smallest gesture, even to how Chauviré places her hand on Nureyev’s shoulder—soft and hesitant, the touch barely there, as if Giselle’s pure spirit is barred from contact with Albrecht’s too-solid flesh.

I assume the second clip, with Cyril Atanassof, is also from the 1960s (per her Wikipedia article, Chauviré retired from active dancing in 1972), and it includes bits of both acts. A first-act segment has the dance with Giselle’s friends—Chauviré’s movements delicate yet calm and precise—as well as some of the he-loves-me-loves-me-not petal-pulling.  Unlike  productions I’ve seen, with a meticulous petal-by-petal tug, Chauviré tears up the daisy by savage yanks, as if to denude that small flower for betraying her hopes.  In the second-act footage, as Chauviré bends over a collapsed Albrecht (her costume with small puffed sleeves more flattering to her arms), she does something I also haven’t seen from other Giselles.  She points up (her eyes following her gesture), then sharply backs away, as if aware of a sudden change, a darkening and disturbance around her.  Only then does she appeal to the Wilis, first to Myrtha, then to the corps, seemingly locating them as the source—Chauviré creating a specific atmosphere around her, responding to every moment, in the moment.

At the end of the second clip, as it fades to black, you can hear Chauviré’s voice murmur, almost inaudibly, “Adieu, Giselle,” fading away like the film itself.  Was this a recording of her final Giselle performance?  Based on what is seen here, it looked like a lovely way to go.